We all love Road Trips – but we especially love them when they are safe and hassle free. Vehicle problems can quickly turn a fantastic Road trip into a living nightmare. Before you set out on the Road, we recommend that you follow these 5 easy tips.

1.) Check tire pressure and condition. Every five pounds per square inch (psi) of tire pressure you lose can translate into a two per cent loss of gas mileage. On a long trip – This can really add up. You can usually find your recommended pressure on the inside of the driver's side door).

2.) Check coolant condition and level. Coolant not at the right level and condition can cause overheating and poor A/C operation.

3.) Top up windshield washer fluid. - Travel season is also bug season. You’ll want to keep your windshield clean so you don’t miss all those great sights along the way!

4.) Serpentine belt condition. If your belt breaks, you will be stranded. Look for cracks and missing belt segments. A belt's failure could mean serious damage to the engine or its systems. A cheap belt replacement can save money, headache and an expensive tow.

5.) Make sure your maintenance is current according to your owner’s manual, including a fluid and filter change. A dirty air filter can dramatically reduce fuel mileage.

At InspectaCAR, we offer vehicle maintenance inspection packages (which also include items 1-4 and customizable to your vehicle) that will ensure your road trip is a success! The minimal expense will quickly pay for itself in better fuel economy and peace of mind.

To help make your road trip more affordable, we are offering a 10% discount on any of our Maintenance packages. Just mention the 10% Summer Road Trip Special to an InspectaCAR Receptionist on arrival. Visit our Site 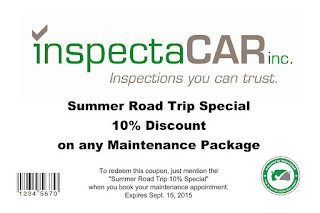 Posted by InspectaCAR inc. at 21:55 No comments:

Did you know that we offer Mechanical Advice? If you have a question, just click on this button on our website and ask away!! It will be answered by one of our certified Mechanics - and the best part is Its FREE! 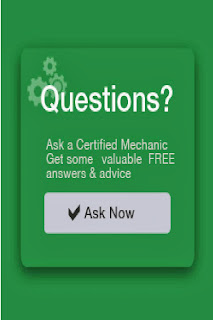 Posted by InspectaCAR inc. at 18:05 No comments:

Two of the additional services InspectaCAR Inc. provides for its customers is Carfax's & CarProof History Reports. Both provide details of past registrations, accidents, damages, if its been stolen, etc.
Why might you need this service?
Buying a used vehicle can be risky and stressful. Both these services provide a good piece of mind on the vehicle and you may learn things the owner didn't even know about the vehicle. For example: You may buy a vehicle that has been in an accident,  then repaired, and wonder later why it is having problem after problem.With both these services it may  catch what you didn't and help you avoid spending more money and time then you intended on a vehicle.
Check them out for yourself!
Then come on down & we'd be happy to make your buying or selling experience safer and easier.
CarFax

Posted by InspectaCAR inc. at 09:57 No comments:

OUR MISSION
Our mission is to provide our customers with unbiased, thorough vehicle inspections. This will give our customers insight into the condition of their vehicle, which will allow them to make more informed decisions. We will strive to become a trusted channel in helping people find quality used vehicles; benefiting and protecting the seller and the consumer alike. We will strive for professionalism and excellence so that our customers will look to InspectaCAR as the leader in the industry.

Posted by InspectaCAR inc. at 11:52 No comments:

Email ThisBlogThis!Share to TwitterShare to FacebookShare to Pinterest
Labels: Our Mission

Who is Behind All of This?

How InspectaCAR came about:
Throughout his career in the automotive industry, Sheldon has encountered and observed some basic reoccurring problems and concerns.
1.        People wanting to know if the vehicle they were considering for purchase was safe and in good repair.
2.       People were worried and skeptical of mechanics and if the repairs they were being quoted were accurate.
3.       He was also concerned with the safety of vehicles and was quite alarmed with the amount of unsafe vehicles on the same roads as his wife and children.
These common problems began to formulate the idea for this business plan.  Sheldon saw a problem and decided that there must be a solution.  InspectaCAR is the solution he came up with, which he is currently operating, along with his partner Cody Paxman.

Email ThisBlogThis!Share to TwitterShare to FacebookShare to Pinterest
Labels: Ownership

Where Can You Find Us?

Lethbridge, Alberta
was the first home to InspectaCAR Inc in May of 2010.
We are located in the industrial area of the city, 3231 2 Ave North.
Our newest location is found in
Calgary, Alberta
542 38A Ave SE.
Both locations are eager to serve you and help in anyway. Come down, check it out or call with any inquiries about vehicles; whether your buying, selling or just need some mechanical advice. Also, don't forget to visit our Website and print off a
10% off coupon for your first inspection!
Posted by InspectaCAR inc. at 13:33 No comments:

Email ThisBlogThis!Share to TwitterShare to FacebookShare to Pinterest
Labels: Locations

Is your vehicle making a funny noise?  Have you been given an alarming quote from your mechanic and are wondering if its accurate?  If you have any mechanical issues and are seeking a professional opinion.  We can help.  Our Certified Mechanics are here for you.  Just go to our website and click on the "Ask a Mechanic" Button.  Our mechanics are standing by to give you the best advice possible.  And the best part about it - IT's FREE!!!
InspectaCAR homepage
Posted by InspectaCAR inc. at 15:16 No comments:

InspectaCAR inc.
Calgary, Lethbridge, Alberta, Canada
DO YOU WANT.... A Quality Used Vehicle? To Ensure Your Vehicle is Safe and Well Maintained? An Unbiased Opinion on your Vehicle Repairs? To Avoid Being Sold Unnecessary Parts & Repairs? Look no further, we can Help!

No Seal. No Deal. 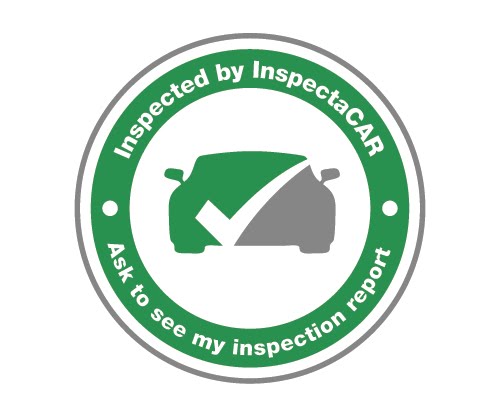